On this day in 1912, the H.M.S Titanic, a British passenger liner sank in the North Atlantic Ocean in the early hours of  the morning after it collided with an iceberg during its maiden voyage from Southampton to New York City. This memorial in Southampton was erected in honour of the engineers who died. 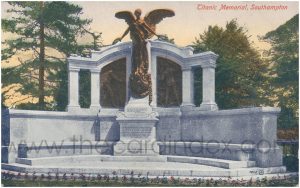